Here’s a post I forgot to write about from the end of August.

My brother Alex and his friend Bruce found this baby newt on the road near us alongside a chalk stream. They brought it home to show us and we put it in a container to identify it. I had recently got some really useful FSC identification charts for my birthday and we decided that the newt was a “palmate newt” baby. It was almost the same size as the picture itself. We watched it swim around the container for a bit getting on and off the raft we put in, but then it unfortunately escaped before we could return it… I wonder where it is now. 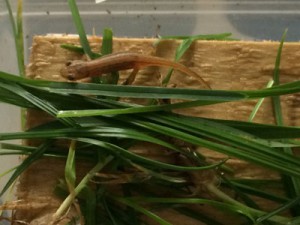 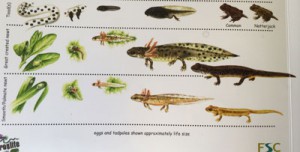