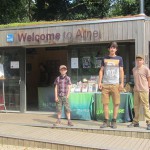 Today we were back at Arne with my cousin Joe (a residential volunteer with the RSPB)  to do a Reptile Ramble around the reserve.

Arne RSPB reserve is lucky enough to have all six of the UK’s reptiles. They are –

It was another hot day so believe it or not, it was actually a bit too hot for most of these cold blooded creatures.

Under one of the corrugated iron sun traps though we were lucky enough to see two adders. One was a large dark one and the other a smaller rusty coloured one. They were too quick for us to get a photograph. The RSPB staff at the Arne Information Centre were doing Reptile Show and Tell sessions every hour though so we caught up with one of those and learnt lots of bits of information about their habitat and why Arne is so special. They had a baby adder and also a beautiful smooth snake there to look at. Smooth snakes are quite rare in the UK now largely due to lack of habitat (heathland) and what heathland there is is too fragmented. 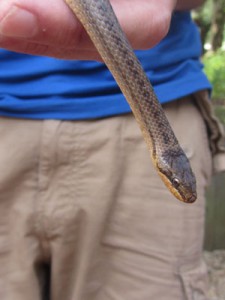 Then Joe took us to see the pond where there are Raft Spiders and sometimes Wasp Spiders. We spotted two Raft Spiders balancing on the weed and the surface of the pond and despite checking the grass around the edge of the pond we didn’t spot any Wasp spiders. There were lots of dragonflies patrolling the pond too! 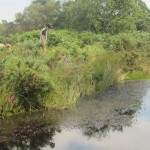 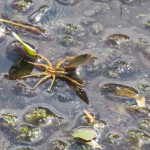 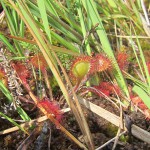 Joe also showed us quite a large patch of the carnivorous sundew which were in a boggy part of a field. They were great to see.  We didn’t see any flies trapped though.