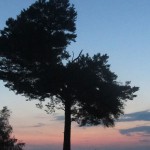 This weekend my family has come down to Dorset to visit my cousin Joe who is a residential volunteer warden at Arne RSPB reserve. Last night Joe invited us on a nightjar walk on the heath. The sun was just going down and the mozzies were biting as there had just been a huge storm.  As soon as we started walking on the track we heard the ‘chirring’ sound nightjars make when sitting down in the heather. Soon after, we began to hear the ‘coo-ick’ sound they make when flying.

Despite all the noise around we still had not seen one so we carried on down the path. Further on we heard the call again much louder this time so we crouched down so that our silhouettes weren’t visible over the sky line.  Then a fluttering shadow flew over our heads, similar shape to a cuckoo, we recognized it immediately, a Nightjar. 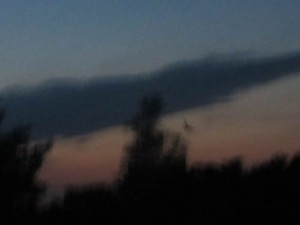 The best but very blurry shot of the female Nightjar

After admiring the fluttering shape for some time Joe told us that this female (you can tell because they lack the pale circles the males have on their wings) was guarding its nest and we were best to leave it be. This was reinforced when a male came and tried to herd us away.

On the way back, nightjars calling all around, we spotted a green glowing light in the heather. We went over to investigate and found the source of the light was a glowworm. Alex and I briefly held it in our hands. It was so cool the amount of light that it showed. 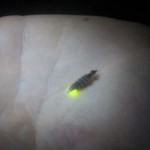 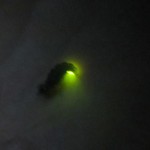