It is now the summer holidays and I am currently on holiday in Newport near Cardigan, West Wales.  I am enjoying the wildlife here as well. I’ve been using my new camera, trying out all the new functions. It’s taking a while… Today we did a long coastal walk around  Dinas Head and saw lots of wild life including: 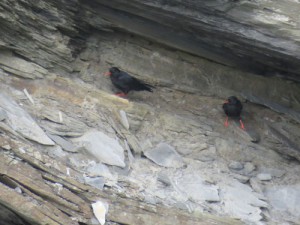 Choughs: There was a family of these charismatic birds performing their acrobatic flying up and down the cliff face. 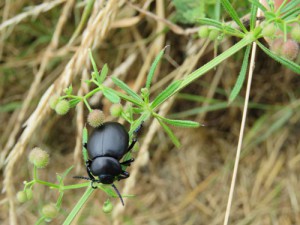 I found this Beetle  – which I think is a bloody nosed beetle, clinging on hard to the sticky weed to stop itself being blown away by the strong coastal wind.

I also saw gannets and fulmars as well as the classic herring gull but they were difficult to take a photo of because they were usually too far away.