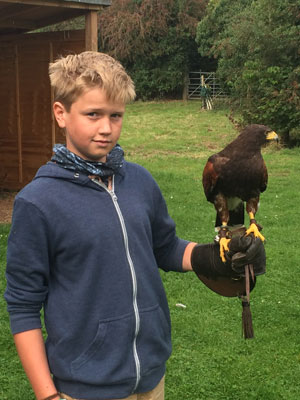 This is me with Jossie the Harris Hawk. I’m choosing this as my image of the week. I had such a good day.

Yesterday, after saving up some money I went on a Young Falconer’s Experience at the Hawk Conservancy Trust in Hampshire. It was fantastic. While I was there I learned some of the skills you need to become a falconer. All the birds at the conservancy have either been hand reared or nursed back to health after injury.

Firstly we helped weigh a hooded vulture called “Heddy”. Then we flew him in Reg’s Meadow. Whilst flying Heddy we learned how to hold your falconers glove and how to release a bird into flight. Heddy went back to his aviary and a black kite joined us for some more flying in the meadow. With the black kite we threw food into the air so that he could catch and eat the pieces on the wing.

We went to the lower flying area and flew a massive Eagle Owl called Tolkien. This is the biggest owl found in Africa. We also worked with a Caracara who used his feet and intelligence to locate food we had hidden around the arena. Did you know that a bird of prey is one who uses its feet for hunting and capturing food instead of its beak?

One of the other skills we learned was tracking lost birds using transmitters and receivers. We tracked one our instructors around the park and found her hiding by the vultures aviary. 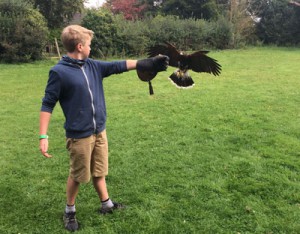 The highlight of my morning though was flying a Harris Hawk. We released the hawk, Jossie, who went to sit in a tree. Then we would call her in to our hand and tether her to our fist using jesses. Harris Hawks are apparently the easiest birds of prey to work with because they usually work as a team in the wild and see humans as another hunting partner. Unfortunately Jossie at one point wheeled around and killed a wild pigeon in a tree. We knew she had caught something when she dropped from the tree and started mantling over her kill on the ground. Mantling is when a bird of prey covers their kill with its wings and tails feathers to hide it from other predators or scavengers. Our instructor had to exchange the pigeon for a piece of food. Sadly we could no longer fly Jossie as she would have gone straight back to her kill.

I had such a great day! Big thanks to my instructors Cathy and James.