We had a great time at Arne at the weekend but as well as being a reptile weekend it was a good caterpillar weekend. Some of the best included:

Stripy Cinnibar moth caterpillars on the common ragwort plant dotted about, almost every plant was covered with the little black and yellow caterpillars! 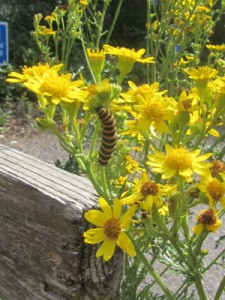 A Buff tip moth caterpillar dropped on me during our picnic lunch under a silver birch tree overlooking Poole harbour. This is odd because although the moth is adapted to blend in with the siver birch bark, the caterpillar apparently prefers oak. 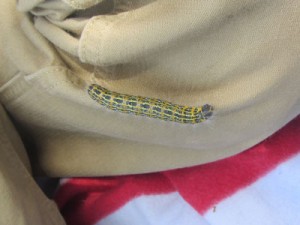 Bufftip caterpillar giving me a surprise when it landed on my trousers. 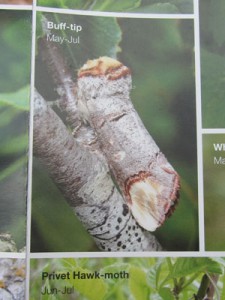 A picture we were shown by one of the staff at the information centre at Arne of a Buff tip. Note how it looks like a broken silver birch branch.

But probably the best caterpillar we saw was a Privet Hawk moth caterpillar in the carpark at Arne. It blended in so well that we wouldn’t have seen it if it hadn’t been pointed out. Even more strange is the illusion that the leaf makes above the caterpillar. It looks like a humming bird pecking at it. For this reason I am making this my image of the week. 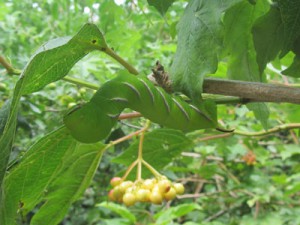 The massive privet hawk moth blends in very well with the leaves around it.