On a walk a few days ago my dog Jess didn’t coming back when we called her. After a quick scan of the woods around us we saw her nosing around with great interest. We thought it was deer scat or something like that which isn’t really good for her. When I went to retrieve her I realized that she had been licking the marrow out of a massive deer antler! I took it back to the path to show it to my mum and brother. We could all see that this was a fallow deer antler. We took it back to our house to clean the antler up. We then saw that small forest animals (or Jess) had chewed the end (shown in picture below) possibly to get to the marrow in side. 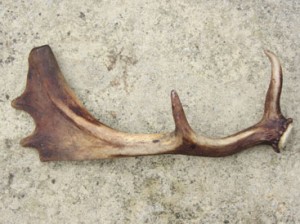 After some research I found out that the Fallow deer is the only species in Britain with palmate antlers (so called because of the flat palm like bit at the top of the antler).  Also the deer’s antlers at full size have an average length of 70 cm.  This one measured 37 cm so I am guessing it was a teenage buck about 4 years old.  I also found out that new antlers form every year and bucks (the name given to Fallow deer stags) tend to discard or cast them in late winter/early spring usually within a couple of days of each other.  New antlers form from April to June and are usually fully grown by the end of August.